Prague: Entrepreneurs against the government 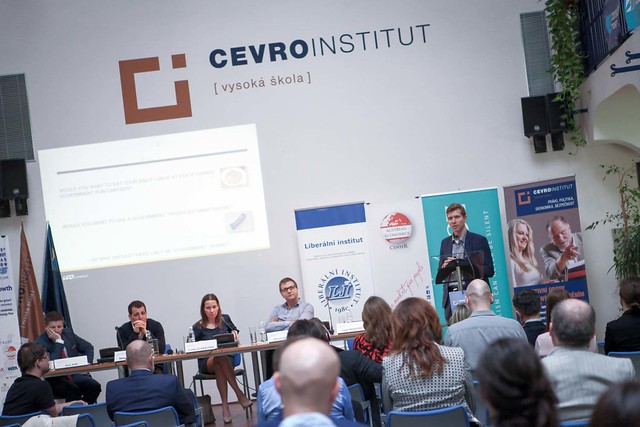 On Thursday, April 16th Prague hosted its Free Market Road Show event. Teaming up with Prism Group, Cevro, European Students for Liberty (Czech Republic), and the Liberal Institute the panels focused on the current economic situation and the role of entrepreneurs.

During the first panel, Lukáš Kovanda highlighted that economic growth has definitely declined in the past decade or so. Why is this happening? One of the main reasons, the Czech economist claimed, is the increasing role that public institutions have taken in financial markets. The so-called “safe assets” some governments offer are sucking the markets dry. This is indeed one of the major causes of the secular stagnation we are suffering. “Because we have so many public institutions in the global market we have secular stagnation”, said Kovanda. And what is more, there is no way that these institutions and governments could mimic what private institutions do – since their nature and incentives are utterly different. “Public institutions do not fail”, argued the economist, “and that is a problem for the world economy”.

Prof. Ekkart Zimmermann drew attention to international trade theory and the bringing together and building up of human capital. He addressed the many factors accounting for state overregulation. In that respect he stressed a clear direct link to weakening economic growth.

He also focused on educational issues, stressing the need for creativity from early on. In that respect competition is a vital element at any stage, from kinder garden to University level – just as in sports.

Finally, he left one of the strongest statements of the Road Show so far: “People trust now the governments with their pension savings the same way people used to trust a certain leader for guidance. The results in both cases are catastrophic”.

Shmuel Chafets reflected on the lack of European entrepreneurs. “Why is Europe so bad for entrepreneurship? There is a lot of capital and markets. It would be only logical that Europe produced more”. His answer focused on the negative role the European Union plays. “The money that the EU spends on entrepreneurship is the biggest gridlock to true entrepreneurship”. This situation is perhaps best exemplified by the nonsensical fact that the EU grants some of its subsidies under the condition that companies do not sell their products in the open market but channelled them though the EU structure.

The panel was closed by Pavol Lupták who gave one of the most encouraging and refreshing talks of the week. His Bratislava IT company Nethemba has launched the campaign “We do not work for the government”. Lupták believes that the traditional ways of changing the system, enter politics for instance, are a dead-end so it is time to try new ways. His campaign has also a Randian moral underpinning: not to provide the government with your skills.

Moreover, Lupták signals the fact that those who work with the government do so in a very much unleveled field. “You are never on an equal base and you cannot trust the judiciary system to protect you in a country like Slovakia”. Besides, governments are many times responsible for the destruction of the business environment and are trying on a global scale to impose a digital state dictatorship. These things hardly make them good candidates for partnership in a market relationship.

Finally, Lupták explained how they are trying to add more companies to their campaign: “We offer special discounts for our products and services”.