Making ourselves free in Podgorica

Montenegro is a small country with great people. One way to realize that is to pay a visit to the University Donja Gorica (UDG). Founded by Veselin Vukotic, UDG hosts regularly the Free Market Road Show and organizes one of the best stops of the tour each and every time.  Last April 24th we had a terrific conference there! 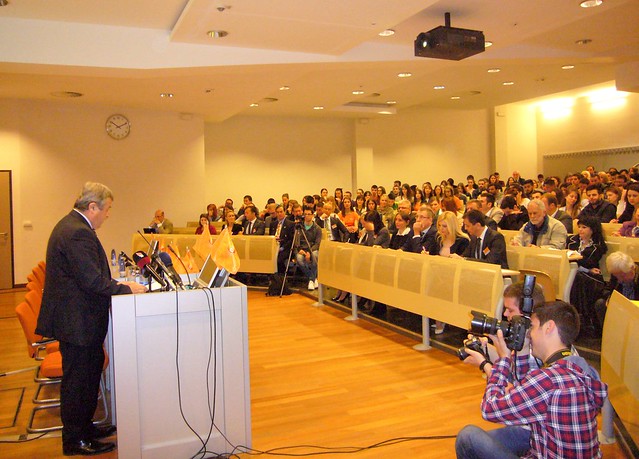 The event was opened by Mr. Predrag Boskovic, Minister of Education of Montenegro. Unlikely for a politician, he described the things he thinks are wrong regarding education. According to Boskovic, although Montenegro promotes an open society, in higher education mistakes have been made. The Minister was referring to the current structure and financing of public universities in his country. He promised that “more free market solutions” will be applied to solve this.

After the opening speech came a panel fully devoted to entrepreneurship. Barbara Kolm, the Director of the FMRS, kick-started it. She claimed that entrepreneurship and failure are always intertwined. “Entrepreneurs must realize that they can fail. And they must learn from mistakes”, said the economist.

Milorad Katnic (Societe General Bank) said that redistribution is the biggest enemy of entrepreneurship because it generates wrong incentives. Richard Zundritsch, a board member of the Hayek Institut and Austrian Economics Center, reminded us that entrepreneurs can always vote with their feet and that governments should always bear this in mind when they think about regulations and taxes.

Freedomworks President and CEO, Matt Kibbe, reflected upon the role of work in our lives. “Sometimes work sucks. Work can be a burden, a responsibility”, and he continued, “but work is also awesome. It can be doing something that nobody did before”. His best example: “Work is creating a university like UDG, which should not exist!” In this sense, entrepreneurship means to create something that everybody else thought was impossible. 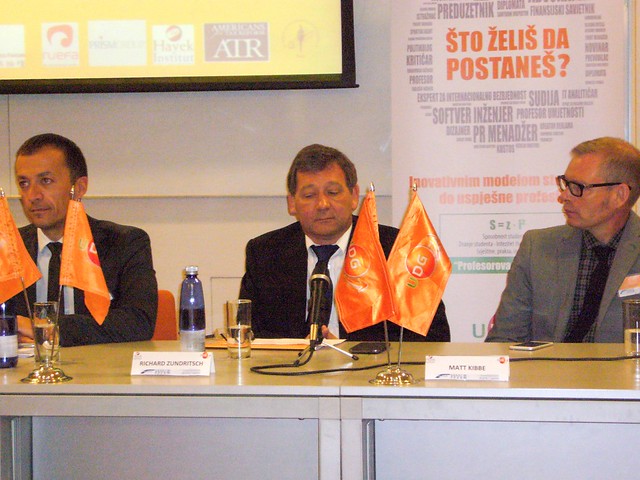 Asked about what freedom was to him, he replied: “If you want to be free, you have to make yourself free”.

Kate Sheehan, from the Free Market Institute, explicitly stressed the importance of entrepreneurship for economic growth: “The best way to achieve economic growth is to have policies that allow entrepreneurship”. A thriving entrepreneurial scene grants the freedom for a lot of experimentation. Of course, not all experimentation is successful and Sheehan acknowledged that in the US, 2/3 of all new businesses fail. That is precisely why “a key to long-term entrepreneurship is being able to leave the market when things go wrong”. In Europe, unfortunately, the situation is completely different. Individuals whose businesses fail run the risk of becoming social pariahs.

Finally, local hero Ivan Jovetic (a professor at UDG and himself an entrepreneur) warned about the uncertainties of the European stagnant economy: “The lack of growth endangers society”. He went further and criticized the prevalent European mentality against sound economy. “We need to create a different mindset: the heroes in Europe today are the bureaucrats and the regulators”.