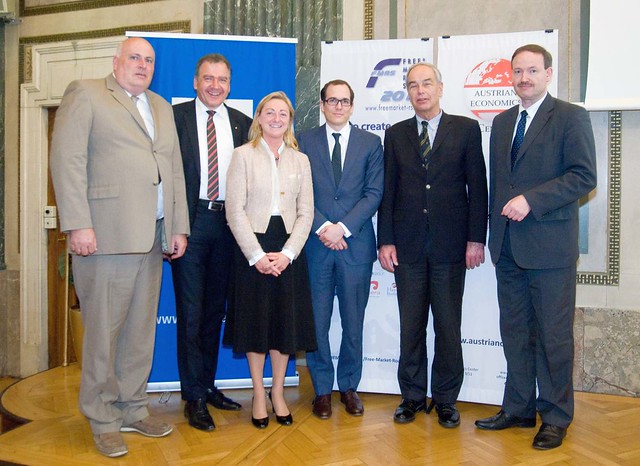 If the Free Market Road Show nation had a capital, that city would definitely be Vienna – which headquarters the Austrian Economics Center. On April 15th Vienna witnessed a very heated debate  regarding the economic and social situation of Austria and an intellectually deep exposition by Prof. Erich Weede about growth and European stagnation.

Let’s start with the latter. Prof. Weede, a most gifted academic, centered his talk on one of his papers (published by the Cato Institute). What explains growth, Weede claimed, are the “level of economic development, human capital, and economic freedom”. Furthermore, underdeveloped countries can benefit from their backwardness since they can quickly catch up thanks to the relative easiness of technology transfers. Thus, “if the West had not invented economic freedom and capitalism, nobody could imitate these advancements”.

Our speaker also paid attention to the phenomenon of immigration and migration in Europe. According to the retired university professor, “Western countries have lost control of their borders”. One of the problems of economic success is that it makes certain countries extremely attractive for unqualified immigration. On the other hand, Europe’s most talented and entrepreneurial have a tendency to leave the continent due to the exploitative tax regimes and lack of incentives. Quoting Hans-Werner Sinn recent article (here original in German), Weede said that “immigration is not a good bargain for the tax payer”. However, “politicians are not ready to discuss this problem”.

Weede’s presentation was followed -as mentioned above- by a very heated debate between the economic spokesmen of Austria’s political parties.

Sepp Schellhorn (NEOS) was perhaps the most explicitly defendant of entrepreneurial freedom. He criticized Austria’s overregulation and burdensome tax code. “Our generation wanted something different than what we have today. This was the reason why I, as an entrepreneur, came into politics”, said the MP of Austria’s youngest party.

Mr. Axel Kassegger (FPÖ) went after the coalition government’s waste and presented a very detailed list. He said, for instance, that Austrians pays billions of euros for the EU, in debt interests, in subsidies, in an ineffective healthcare system, and in an unfair pension system.

The MP also focused on the importance of individual freedom and a market economy.

In the same direction the Green Party MP, Ruperta Lichtenecker, argued against the recent developements of HETA (Hypo Alpe Adria) and government’s incapability to solve problems, without creating additional burdens for the tax payer.

This was the keyword for Manfred Moschner, the only non-politician on this panel discussion, who focused on the lack of incentives for international investor’s if Austria continues to neglect international challenges.

Without doubt, the most polemic participant was Mr. Christoph Matzenetter (SPÖ), a member of the majority partner of Austria’s coalition government. He accused the opposition of not being “fit” to rule the country and of ignoring all the government “successes”.

MP Georg Vetter (Team Stronach) added heat to the debate by defining socialism through its passion to punish private activities and considering themselves of being led by higher insights and well-meaning and having a monopoly over the law.

FMRS Director Barbara Kolm reflected on how the concept of competition is understood in Austria. It is very well accepted in sports but it is a “bad word”everywhere else. On top of this, Kolm said that there is a lack of risk mentality in her country. “We need to make entrepreneurship sexy again”, she concluded.

Matthias Krenn, the Vice-president of the Chamber of Commerce and a successful entrepreneur himself, emphasized the role of self-responsibility and freedom while Christian Helmenstein, chief economist of the Federation of Industry, pointed to the fact that growth is the result of creativity and a thriving entrepreneurial scene.

Finally, Nicholas Jilch did an exceptional job by moderating both panels and keeping the excitement. 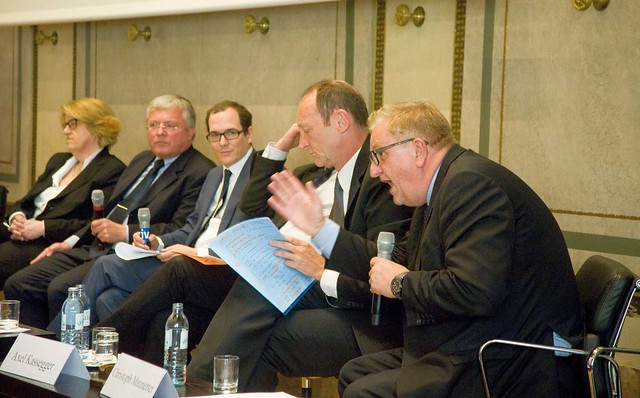