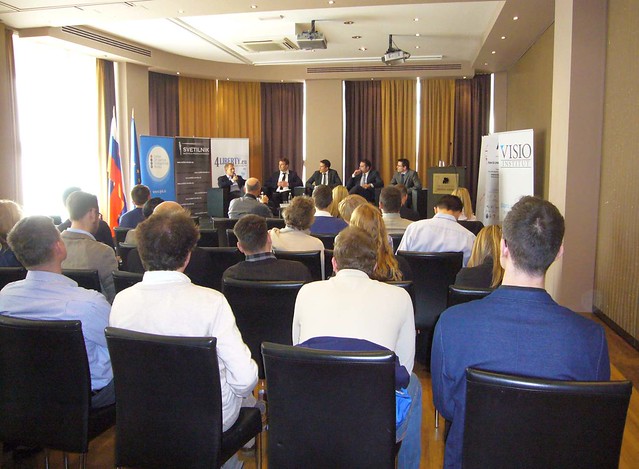 After a long year of preparations by the Austrian Economics Center and more than ninety international partners, the 2015 Free Market Road Show was launched on April 13th in beautiful Ljubljana (Slovenia). This event kick-started the biggest Free Market Road Show® ever organized. The 2015 edition will tour thirty six cities across Europe, the Caucasus, and -for the first time- Israel.

The FMRS® Director, Dr. Barbara Kolm, highlighted during her opening remarks that “the Road Show has created a big fellowship within the Libertarian movement”. She stressed the importance of working closely for Think Tanks and the invaluable contribution that the different “local heroes” make to the FMRS®.

For such a grand opening, we could not have had better speakers. Prof. Ekkart Zimmermann spear-headed the first panel making the case for entrepreneurship. He contrasted divergent views on entrepreneurs and wealth and warned about the great level of envy and resentment that is present in the European world view. “In Europe we are suspicious of people who have capital. In America money is not a problem”, said Zimmermann.

So, what does an entrepreneur do? “An entrepreneur leads people to the workplace”. This, of course, does not turn the entrepreneur into a dictator. People have jobs thanks to individuals who take risks and are willing to make huge sacrifices following their intuition. Perhaps here it is good to point out that, among those sacrifices, not only can one count working long hours and not receiving a pay check but also that most entrepreneurial attempts end up badly. “Entrepreneurs are like revolutionaries”, said Prof. Zimmermann eloquently, “they must fail before they win”.

Then came Mag. Christof Zeller-Zellenberg with a provocative talk about human progress. He reminded us about the dangers of siren calls. Case in point: the anti-growth rhetoric. Imagine, as many have repeated ad nauseam, that the economy is merely a zero-sum game in which the profit of one player is the loss of another. If so, there would be no such a thing as economic growth. There would only be one “pie”, and the best we can do is fairly distribute it. Thus, we should be very thankful that our ancestors did not buy this way of thinking. Had they done so, we would still be in the caves and our greatest “technology” would be fire.

Slovak economist Radovan Durana shared his views about this issue in his home country: “Foreign investments were good for Slovakia. But our current government is sending some very bad signals. I am afraid that foreign investment will decline sharply if this trend continues”.

UDG professor Ivan Jovetic talked about one of the good examples of the region, Montenegro. He celebrated the achievements of his country but wondered how Montenegro could maintain its success in reforms. In this regard, EU accession will definitely play a role… and not necessarily a positive one.

Austrian Economics Center Research Fellow Roland Fritz expressed that competition is essential for a healthy economy and that would be difficult to achieve in Slovenia since there are many state-owned companies.

However, who stood out for his impressive knowledge of the country was Peter Hasslacher, from Advantage Austria. Mr. Hasslacher compared the situation in the 90s and now. Back then, “investment was booming. The change has to do with local issues and not with the Euro crisis. The crisis is home-made. And the solution has to be home-made as well”.

Finally, Hasslacher referred to the issue of FDI and used his own country as example. “Austria has a lot of companies which produce sky equipment. But only one of them is owned by Austrians themselves, the rest belong to foreign capital. But, who cares? Production and R&D have remained in Austria. This is the result of a policy of opened doors and windows. Foreign investment is not an enemy”. 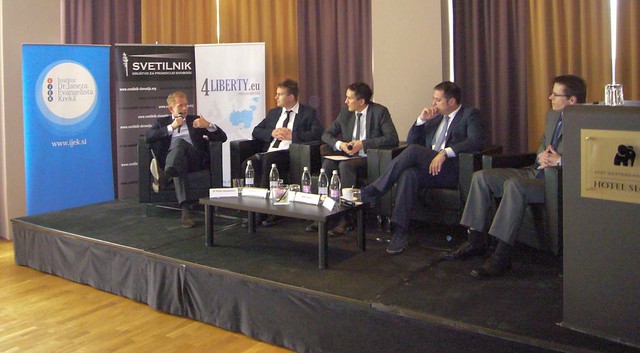