“Successful reforms are always in danger”

Teaming up with local partners of Civil Development Forum (FOR), the Free Market Road Show brought its message of freedom to the Polish capital. The main auditorium of the Warsaw School of Economics was a splendid venue for our travelling event.

Without doubt, Leszec Prof. Balcerowicz presentation was the highlight of the program. Balcerowicz, a key figure of Poland’s transition from communism to market economy, centered his speech on the importance of defending the reforms. “The defense of the reforms is as important as introducing it”, said the economist eloquently and added that “successful reforms are always in danger”. Indeed the recent Polish pension fund nationalization has set alarms across Europe regarding the stability of free markets reforms. 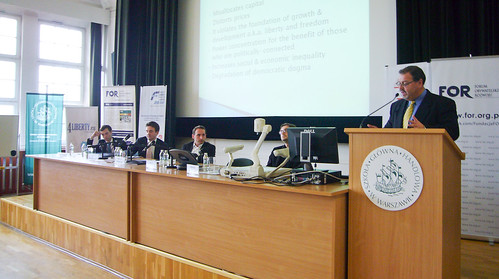 “Democracy is not enough. We need a lot of monitors to stop the powerful populists groups” diagnosed Balcerowicz. This counterbalance must be built by the civil society. “We need organized pressure to defend free markets and freedom in general”. According to the former policy maker, this will be our never ending task.

The European Union was examined from a Polish perspective during the event. According to the speakers, the EU has been a force for opening markets in Poland. Thus said FOR’s Marek Tatala: “Deregulation of some sectors of the Polish economy would have never happened without the EU”. However, Tatala alerted about the growing political power of Union: “Centralization affects transparency: most of Polish do not know what is going on in Brussels”. 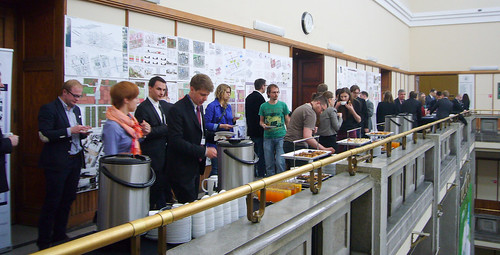 The Austrian Economics Center (AEC), in cooperation with the local partner FOR, Warsaw School of Economics, Bankier.pl and in association with international partners such as the Liberty Fund, Global Philanthropic Trust, European Students for Liberty, Ruefa and the F.A. v. Hayek Institut, proudly organized this event in Warsaw. This was the seventeenth stop of the 7th Annual Free Market Road Show® which tours from March 26th to May 12th. 30 cities, hundreds of speakers, thousands of attendees and one message: Freedom.