After the Free Market Road Show visited some EU member countries, it was time to start the Balkan tour and hence, on the 21st April stopped in Skopje. The Austrian Economics Center in cooperation with its local partners, the Law Faculty “Justinian I” from Skopje and the support of Club Alpbach Macedonia organized this year’s edition.

The opening remarks were given by the Dean of the Law Faculty, Prof. Velimir Stojkov who expressed his gratitude to the international speakers for their presence and his special thanks to the co-organizer AEC.

Afterwards, Dr. Richard Zundritsch, Board member of the Austrian Economics Center briefly described the Macedonia of the past and the present one, addressing the multitude of changes that have occurred in this relatively short period of time.
The keynote speech was delivered by the Project Director of the “Friedrich Nauman” Foundation, Mr. Daniel Kaddik, who stressed the need for stability and freedom for the functioning of free markets. Furthermore, he promoted the idea of having “healthy growth” accompanied with necessary reforms, enforcement of the rule of law and mainly, the need for entrepreneurs.

Then came Kate Sheehan (Post-Doctoral Research Associate at the Free Market Institute) who enriched the panel by presenting the statistics and rankings of the countries based on the economic indicators and particularly, showed the situation of Macedonia. In addition, she said that “the government’s best way to steal from its citizens is through inflation”. And stressed that economic growth can only be achieved through innovation coming out from the private entrepreneurs.
Then followed Jose Cordeiro who spoke about his native country, Venezuela and presented it as the worst example of how a country should be run. “The technology leads to generations of growth but it needs to be based on freedom and requires free market environment” he also said.

The second panel was on how entrepreneurship works. It was opened by the only women in the panel, a successful entrepreneur Mrs. Nina Angelovska, (Founder of Grouper.mk) who talked about the establishment of her company. “The combination of theory and practice along with the motivation to know more” is the formula of her success, she said.

In the end, the commercial attachee of the Embassy of Austria in Skopje, Mr. Gerhard Schattl summarized that the event is a positive contribution towards the exchange of practices and ideas of the entrepreneurs and youngsters who need to upgrade their abilities in accordance to the latest trends and developments in the world. 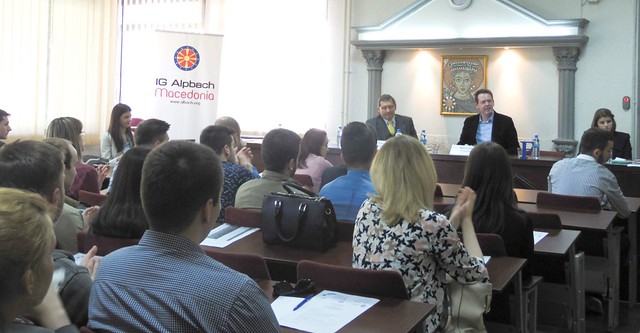